A multitude of Genealogical Numbering Systems have been developed for indexing family trees and pedigree charts in text format. Each system provides a consistent method to determine the appropriate & predictable identifier for persons in a Family Tree.

Most systems assign identifiers relative to a focal person and are oriented towards Ancestors (an ascending system) or Descendants (a descending system). 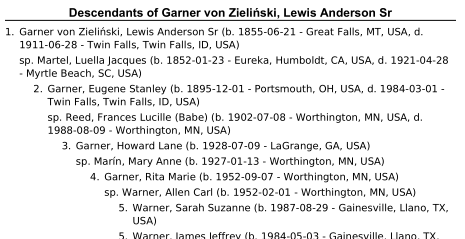 (German for "ancestor table") A tabular layout of genealogical data using an ascending system for numbering pedigree ancestors starting with '1' at a focal person. The number of the father is double that of the child. The mother is double the child's number plus one. 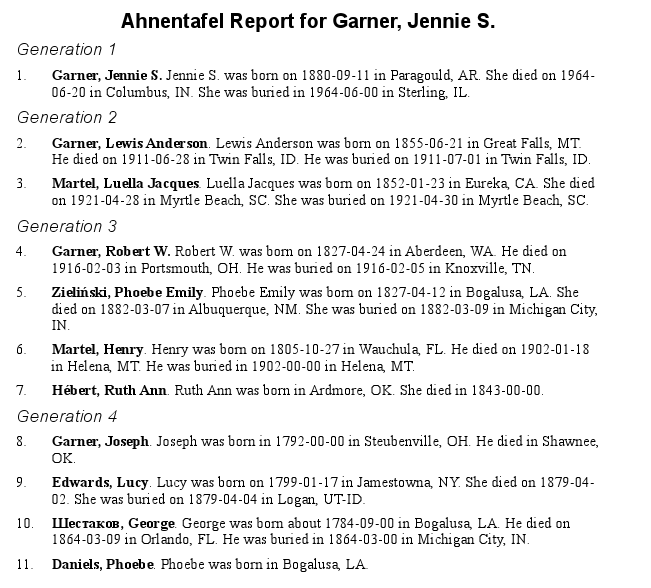 An Austrian nobleman, diplomat, historian, and publicist named Michaël Eytzinger (circa 1530-1598) introduced a new functional theory of numeration of ancestors in 1590 with the Cologne publication of the Thesaurus principum hac aetate in Europa viventium ("lexicon of officials in this age in Europe living"). The Ahnentafel (German for "ancestor table") was first illustrated with a 5 generation pedigree of Henry III of France on pages 146 and 147.

The system was popularized on a large scale by Stephan Kekulé von Stradonitz (1863–1933) when he published his interpretation of Eytzinger's and Sosa's method in his Ahnentafel-Atlas: Ahnentafeln zu 32 Ahnen der Regenten Europas und ihrer Gemahlinnen, 1898–1904, containing 79 charts of the sovereigns of Europe and their wives. (In 1895, Kekulé's prominent organic chemist father was ennobled by Kaiser Wilhelm II of Germany, giving him the right to add "von Stradonitz" to his name, referring to a possession of his patrilineal ancestors in Stradonice, Bohemia.)

A descendant numbering numbering system that assigns letters to generations, and then appends family subgroup birth order numbers. Listed in outline form with a concatenated form used for inline references to the list. In concatenated form, the generations are separated by a decimal point.

Developed in South Africa by Christoffel Coetzee de Villiers 1850-1887 for use in the 1894 posthumous Geslachtregister der Oude Kaapsche Familien. Refined by Dr. Cornelis "Cor" Pama 1916-1994 for the 1966 translation, Genealogies of Old Cape Families. 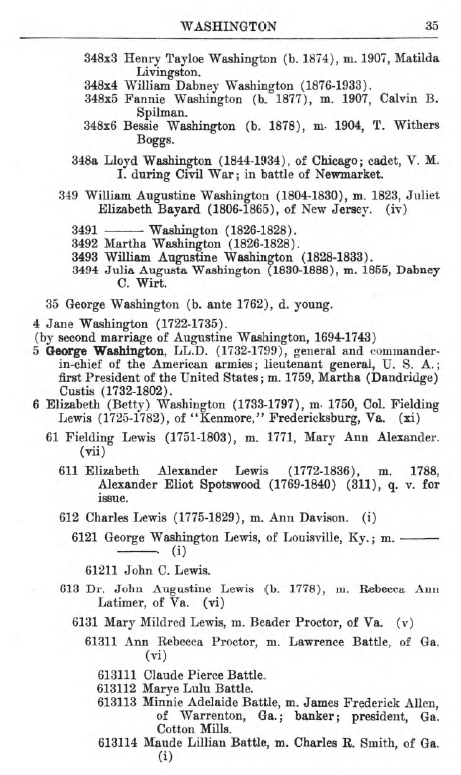 A descendant numbering system that assigns a birth-order digit for each successive generation since an arbitrary progenitor.

The Henry System is a descending system created by Reginald Buchanan Henry (1881-1969) created a numbering system assigning a number for his 1935 book, Genealogies of the Families of the Presidents. In the original book, each USA President began a new section as was a Progenitor. So they restated the generation count of the list. The President was #1 only if they were a firstborn child. Otherwise, the first digit indexing number was equal to that President's birth order. The progenitor's offspring would be Generation 2 and appended a birth order digit to the index in the 2nd place.

Most notations in the Henry System are a modern reincarnation. In the (outmoded) original Henry System, if there were more than 9 children, the tenth child is given the letter 'X' (in deference to X meaning ten in the Roman Numeral system) and the eleventh child starts alphabetical substitutions with letters A through V. So a 4 digit index of 64B3 would be a child of the fourth generation. That descendant would be described as the 3rd child of the 12th child of the 4th child of the progenitor. And the progenitor was 6th born in their family. The modern Henry System is adapted to computerized sorting and ignores the preconception of the Roman Numeral system. It extends the Hexadecimal numeral system scheme and starts the substitution with 'A' for ten. In the modern Henry system, the 64B3 would have an 11th born child in the 3rd generation spot.

The original book also used an outline form which successively indented for each generation. Although simple to comprehend, the Henry format is not accepted for most genealogical publications.

A descendant numbering system that assigns Roman numerals to generations, and then appends family subgroup birth order Arabic numbers with a hyphen. Listed in outline form, normally in conjunction with pedigree charts.

The big difference between the NGSQ and the Register Systems is that the Record (Modified Register) System only assign a new number for progeny that list descendants later in the index. The NGSQ System assigns a number to every child, whether or not that child is known to have progeny.