Implemented for the release of Gramps 4.2

This sections describes the planned software design for the alternative place name extension. 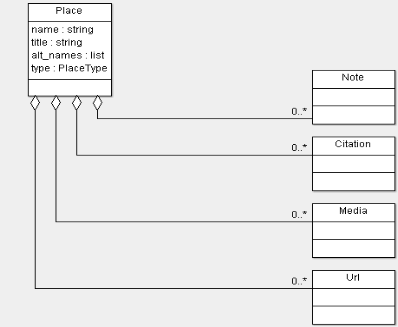 “Data view” means in this context, that the associations between the classes show the data relation of the classes but not the way this relation is technically realized. To show the technical realization the following UML class diagram shows the same objects but from the “implementation view”.

As it can be seen, the implementation realizes the aggregation with a generalization. For Python this will be a realization with multiple inheritance. One important point in the actual design is, that the alternative place names are currently realized by a simple list of strings which represent the alternative names.

To extend the alternative names with addition information, there is a need for a dedicated PlaceName class to encapsulate all the attributes of an alternative place name. In the following figure the planned “data view” design for the integration of a PlaceName class is shown. 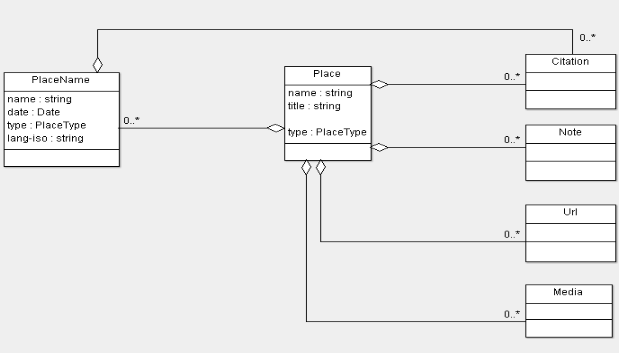 As it can be seen, the new PlaceName class contains attributes for name, date, type and lang-iso code. These attributes are based on Python primitives like stings and also Gramps objects like Date and PlaceType.

In the following figure the “implementation view” of the planned design is shown. In this diagram the new PlaceName class is shown in a red color. 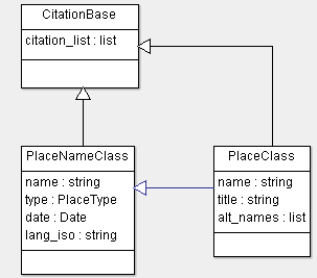 And this construct should be avoided because it could lead to confusion and it introduces more complexity than needed into the model. Furthermore it is not much away from the “deadly diamond of death”. (http://www.python-course.eu/python3_multiple_inheritance.php).

The data structure to store the PlaceName objects inside the Place class should be a simple list. The declaration of this attribute could look like the following:

This is the same declaration as the original list of alternative names besides the fact that PlaceName objects will be stored in this list and not strings.

To provide the ability to implement this extension without disturbing existing functionality, the following API methods of the Place class should be adapted to the new internal data structure but should provide the same behavior as the old API methods.

If these API functions behave the same as before, the change for GEDCOM export, DB backup, GRAMPS XML, Reports etc. can be gradually delivered.

Of course, the realted editors like PlaceEditor in GRAMPS need to be adapted to the new model. Also new dialogs for add/edit alternative place names must be added.

To store the new PlaceName objects in the database the original database class DbBsddb doesn't need to be changed. But it is necessary to change the functions serialize(), unserialized(), from_struct() and to_struct() of the class Place.

Place::serialize() The original code block for the serialization contains a snippet like the following:

That approach assumes, that the PlaceName object provides a method called serialize(). The same is also for the unserialize() method valid.