Proposition of a server mode for GRAMPS. Now that the main graphical user interface (GUI) has been separated from the command-line interface (CLI), a server-mode would be the next logical step.

Web developers are in need of a method of accessing and creating functionality with their GRAMPS data on the web. Having a GRAMPS server-mode would allow a GRAMPS-based web project.

A server mode for GRAMPS is suggested to work as follows. A server program is started, and run in the background. It listens for requests from other processes (on that machine, or others), executes commands, and serves back data.

The server mode is vary similar to the CLI mode of GRAMPS. However, rather than just running a report, the program doesn't exit, but waits for requests. Clients need not keep track of any state. The server would host a single database, and allow multiple people to work on it simultaneously.

A GRAMPS server should allow clients to do most of what a user would want to do with the GRAMPS gtk application:

There are plenty of options for communication formats, including XML. There is also a library called Python Remote Objects for handing this kind of data. However, one possibility is to use Python's native pickle format, as that can be easily sent between connections. Likewise, all of the primary data's raw data can be pickled. Using pickled data requires that no database objects be pickled---only data. One would have to be careful about how you write web applications so as not to involve objects such as generators, and databases.

A prototype of a GRAMPS server mode has been checked into gramps/trunk (targeting version 3.2). It works as follows.

You start the server by selecting the database:

This will start a socket listener on port 50000. If the database is locked, then, like usually, you can supply the --force-unlock flag:

In fact, you can do any of the things you normally do with the CLI, before beginning serving.

The server currently lists each connection start/end, and each request. The server is written in a fashion such that it can take many requests at once. It spawns off threads that handle the details of the request. TODO: does memory get reclaimed appropriately?

The server receives messages that it evaluates, pickles, and returns.

To make programming as natural as possible on the client side, a RemoteObject has been written which hides the gory details of the socket communication. Here is a sample client:

Here, you can use "self" very similarly to the use of self in the server. For example:

Under the hood, the names "db" and "dbstate" are collected, sent over the socket to the server as the string "self.dbstate.db" which is evaluated, and the representation is sent back. Notice that the server cannot return an entire dbstate or db object to the client, but it merely returns the repr string.

You can interactively explore the remote objects, too:

But, you can also get back some full GRAMPS objects:

This isn't just the repr string returned this time, but a real object. You can test that by:

Because you can't get back generators nor database objects, sometimes you need to do some processing on the server. To do this, you can use self.remote:

self.remote takes a string and sends it to the server to be evaluated (or executed). self contains:

Finally, here is an example for listing out the surnames of a family tree on the web:

and the resulting screen shot: 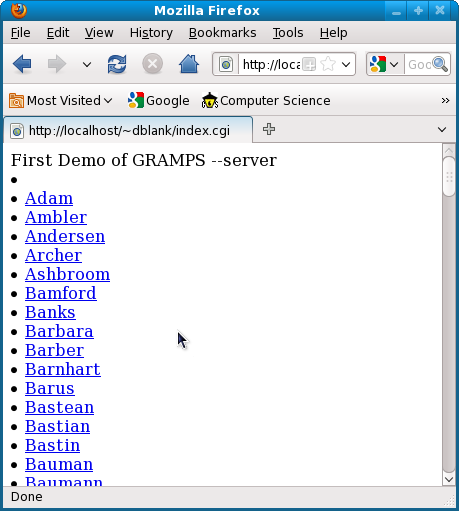