Proposed report for displaying data on a map

This report generates output that can be displayed on a map. For now, the Google Earth application is chosen to display this information, and hence the report is available as a code generator for KML files, the datafiles understood by Google Earth.

The first aim is to display events given in GRAMPS on the map, using the latitude and longitude of the places in GRAMPS. The second aim is to function as a testbed on how to optimally display genealogy data on map, which should be useful if GRAMPS is ever extended with a map view.

Note: It has come to my attention via the Eastman blog that a specific genealogy application exists that does this type of datarepresentation: Family Atlas. I do not have this application, but looking at the screenshots, it appears that much of its functionality can be done in Google Earth also. 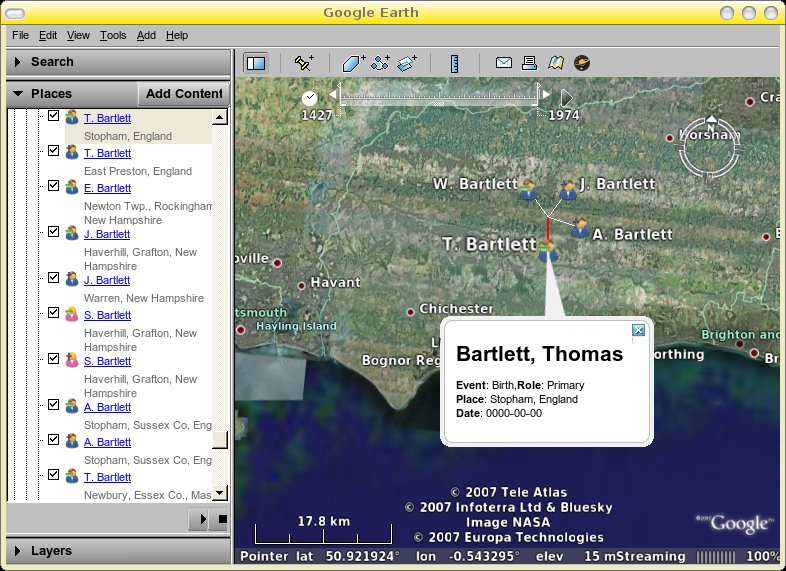 version 0.1 can be found at: MapReport0_1.tar.gz. Read the INSTALL file for how to make it available in the Git version of GRAMPS.

Specification of the code generator

The report is saved to file. The sections contained should be the Document title and the Placemarks. Here, every placemark is a marker on the map.

The document will be titled depending on the filter option:

v0.1 : basic functionality, events with the active person and with the family of the active person
v0.2 : adding filters, and display all that is in a filter. ???What type of filters to allow?
v0.3 : Using the date of the events: movie of the life of person ( (?? is this usefull? Will there be enough events to make this worthwile), plot out emigration paths of a family (Y-line / M-line)
v?.? : Map overlay. Google Earth allows to add polygons to the map, so in theory one could store a polygon map of a county, parish, as it used to be in eg 1741, and overlay it with the data seen in Google Earth. ( ?? Better place containers would be needed than available now, so that places can be grouped, eg town hall Ghent, church Ghent can be grouped in place Ghent). The goal would be to have a polygon attached to places outlining it's borders during several time periods. These could then be layers in Google Earth, like the boundary layers now. ( ?? I think I'm dreaming now...)

Links to other genealogy with google earth