From Gramps
(Redirected from Filtered Reports)
Jump to: navigation, search 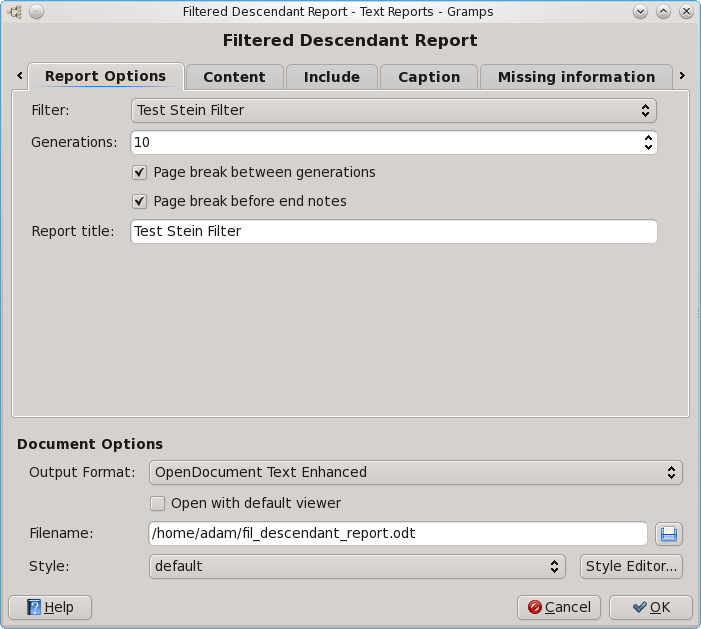 The Filtered Descendant Report is directly based on the Detailed Descendant Report. As such, it includes all the options (which make sense) in addition to some new ones. Because multiple family branches can be included, the Henry and d'Aboville numbering systems options were removed (considering that people common to more than one branch will get the number assigned to them when they are first found).

The main difference is that a filter can be used to determine who to include in the report (so that you can have several family branches) instead of basing all the descendants from a single person. The key is to find at least one common person to all the rules in the filter. If at least one common person is found, the generations can be aligned so that it doesn't matter if the head of each branch is in the same generation.

In order to support this report, enhanced versions of some of the Gramps code is included so as to not require modifications of the Gramps core itself. The enhanced changes are finding their way into the core, so it's only a matter of time until this plugin will no longer need to ship those changes. A list of enhancements can be found after the list of differences.

Differences from Detailed Descendant Report are as follows:

1) Instead of a 'Center Person' to start descendants from, there is now a 'Filter'.

As explained above, the filter can have one or more rules to allow multiple branches to be in the same report. A person, common to ALL rules will align the generations. If no common person is found, an error will be issued.

This option (on the Content tab) tells the plugin whether to turn any http, https, or mailto links found in text (i.e. notes, endnotes, etc.) to be real clickable links. Turning this option off results in the behavior found in Detailed Descendant Report (that is, no URLs are made clickable). Turning it on will cause those URLs found to be clickable in the output file (if possible).

4) Do not include information marked private

This option (on the Content tab) tells the plugin whether to add information to the report that has been marked 'private'. Turning this option off results in the behavior found in Detailed Descendant Report (that is, all information is included in the report). Turning it on will cause the plugin to NOT include anything marked private. After all, what good is the private flag if it's not respected?

Just a label change for the modern age.

6) Add caption under image from Gallery

This option (on the new Caption tab) tells the plugin whether to include captions under photos or not.

This option (on the new Caption tab) specifies what should be in photo captions. For full details on what can be specified, see the Substitution Values wiki page.

Images now appear in the report document exactly how they appear within the Gramps UI. That is, if an image has been cropped, it will be cropped the same way in the report. The Detailed Descendant Report behavior was to just insert the image so that the report showed the entire image.

Turned image manipulation functions into a real class so that an image file only needs to be opened once (instead of every time an ImgManip function is called). Also added a method to return the image DPI (if available). This supports showing cropped images in the report file.

Enhanced to do the following: