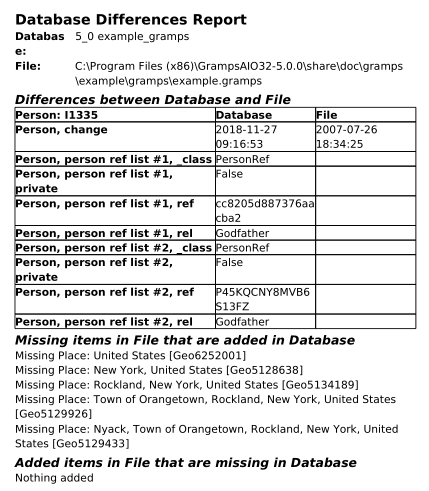 The Database Differences Report is focused on the principal elements of the Database.

There are a number of other types of 'metadata' that are not examined during the Database Differences Report.

Some of these 'metadata' are not 'regular' in the way they are stored, comparing them would be a fair amount of additional code work.

Also note that some of the 'metadata' would be difficult to compare because they are not stored in the backup XML files, but rather in the Gramps initialization files.

The Database Differences Report performs it's work by creating a temporary Database and importing the backup file that you specified. A side effect of this is that if your Gramps Database has been around for a long time, it may still contain things that are not currently allowed. But the comparison will be done against the backup file that has all of those issues fixed. Each correction has the potential of showing up as a difference, but on examination they look the same. It is quite hard to see those leading/trailing spaces.